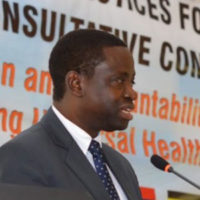 THE East, Central and Southern Africa Health Community (ECSA-HC), a regional intergovernmental Health Organisation whose mandate is fostering regional cooperation in Health, has urged journalists in Southern Africa to sensitise the public on the burden of Tuberculosis (TB) in the mining sector.

ECSA-HC Director General Yoshua Dambisya said the mining sector was contributing massively to the problem of TB and hence it was important for journalists in the Southern African Development Community (SADC) region to help in mitigating the burden of the disease by raising awareness.

Prof Dambishya said TB was treatable and therefore journalists should provide updated information on the prevailing situation on TB so that different stakeholders make informed decisions.

He was speaking here yesterday during the official opening a two-day sensitisation of the media to facilitate informed reporting on TB-related issues especially in the mining sector.
The training has attracted journalists from 11 SADC member countries namely Botswana, Democratic Republic of Congo (DRC), Eswatini, Lesotho, Madagascar, Namibia, Zambia, Tanzania, Malawi, Zimbabwe, and Mozambique.

Prof Dambisya said TB had remained one of the world’s greatest killers, especially in Southern Africa.

He said a lot had been done by SADC countries to mitigate TB but the media was not updated on the matter.

“If a tree falls in the forest and the media has heard or seen the act of the falling, has that tree fallen down? We want to work with the media to prevent TB in the region,” he said.

ECSA-HC organised the workshop to increase meaningful engagement of journalists so that they could effectively play a critical role in TB awareness to create amongst public and especially key population and advocate for sustainable response to TB amongst miners, ex-miners, andperi-mining communities.

The two-day workshop provided a platform for journalists and other media professionals especially those covering health issues to enhance their health journalism skills and knowledge of TB and related issues in public health sector.

According to statistics, one-third of TB infections in Southern Africa are linked to mining activities and recent studies estimate that three per cent to seven per cent of miners are becoming ill with TB each year.

Migration across country borders brings about yet another dimension to the disease burden, where miners receiving TB treatment encounter disruptions in continuum of care, putting their health and that of their families at risk.

Exposure to silica dust in certain mining environments can lead to silicosis, a condition which is a known risk factor for development of TB disease.

As countries adopted the “End-TB strategy”, the Global Fund (GF) committed additional funding for the continuation of the project, resulting into TIMS Phase III.

The GF has allocated an additional US$10.5 million to implement this Phase, under a new Principal Recipient, ECSA-HC.

ABOUT US
Solwezi Today is a business magazine that highlights developments and trends in business and commerce in North-western Zambia and other towns throughout Zambia.
Contact us: info@solwezitoday.com
FOLLOW US
© Copyright © 2021 Solwezitoday. All rights reserved. Designed by Clive Simanansa.
MORE STORIES